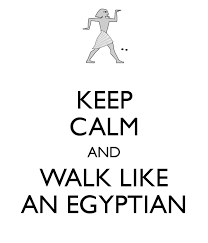 There are 5 things of interest to me in this chapter:

1. The Egyptian number system and symbols.

Students study Roman numerals in elementary school. I would think that learning about Roman numerals could be quite an adventure. Think about the thrill of learning about numbers used in a different time. I believe that students are probably thrilled about our Arabic numerals they use as digits after dealing with the lengthy numbers in Roman numerals. This same feeling surely would surround the study of Egyptian numerals. The added bonus of learning Roman numerals however is that they are still used today. For example… SuperBowl XLVIII. Egyptian numbers are not used in our culture, so any practical tie in is probably minimal. I don’t see learning about Egyptian symbols included in the standard curriculum unless they were doing a study on Egypt or on different number systems.

Fractions of the form 2/n and 10/n were converted into sums of unit fractions of the form 1/n. For example: 2/5 = 1/3 + 1/15.
An interesting activity would be for students working with fractions to try to create a sum of unit fractions that equals each fraction 2/n or 10/n. This could be done one a day as a warm up after learning about adding fraction with different denominators. Students would hear about how Egyptians did this and then try to find out how to create them by themselves.  I think this could be an interesting angle on working with fractions that might motivate some kids. “Can you do what the Egyptians did?”

3. How Egyptians did addition, subtraction, multiplication, and division with numbers written as sums of unit fractions.

It’s crazy that they were able to do all this computation with the clumsiness of unit fractions. I’m not sure this would be a good topic for the regular curriculum, but maybe learning it as a project for one group who would then present to the class.

4. Egyptian problems that were for fun. “…in some places the scribe seems to have had puzzles or mathematical recreations in mind.”

A problem in the Rhind papyrus appears to be the origin for this nursery rhyme:
As I was going to St. Ives,
I met a man with seven wives;
Every wife had seven sacks,
Every sack had seven cats;
Every cat had seven kids.
Kits, cats, sacks, and wives,
How many were going to St. Ives?

How fun… What a great problem for student working with exponents or multiplication while still paying attention to detail. Students could also then create their own mathematical rhyme.  Some recent history on the St. Ives problem.

5. The volume of a frustum.

“The scribe directs one to square the numbers two and four and to add to the sum of these squares the product of two and four, the result being twenty-eight. This result is then multiplied by a third of six; and the scribe concludes with the words, ‘See, it is 56; You have found it correctly.’ “

I think this would be a fun activity in a geometry class. Students could draw the indicated figure, find another frustum’s volume by following the pattern, and possibly even write down a formula for the volume of the frustum. Following is a cool assignment I found online doing just about that. It might be a tad on the challenging side, but you could just ask the easier questions.