I taught a lesson today on Euler’s Method using a differential equation that models the rate that a rumor is spread. The lesson went great, but the real kicker was the setup. I utilized my problem solving class the day before to start a rumor for me that I had lost a bet and got a tattoo of a Pi symbol on my arm. (Not a bad idea by the way.) They got on Twitter and started the rumor for me.  I have three Calculus classes 1st, 2nd, and 3rd periods. By the next morning students were quite anxious to ask if I had a tattoo and I didn’t give them a straight answer. 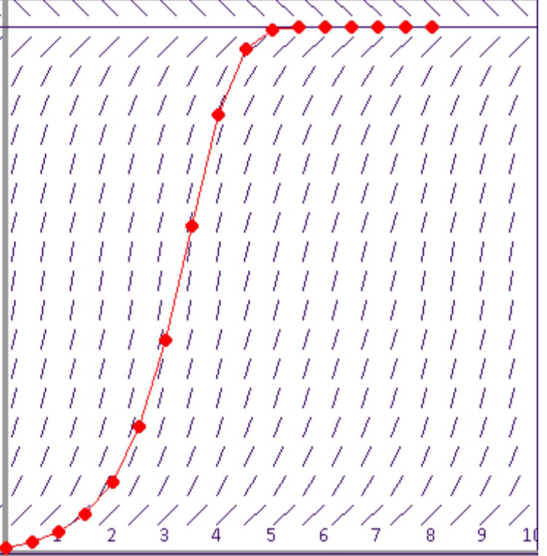 I started out saying that today we are going to talk about rumors. I talked about how rumors spread and how it feels to have a rumor spread about you. Over half of each class had heard the rumor about my tattoo. I told them there was actually an equation that you could use to model how a rumor spreads. Most students were still wondering if we were doing math today or if I was just complaining about people spreading rumors about me. We did Euler’s method with half day step size and found that with the growth constant I chose that almost all of the school would have heard the rumor in 5 days. They were still pestering me to reveal a tattoo which I had anticipated, and I was ready. I told them that If everyone had the assignment correct the next day then I would roll up my sleeve. I needed to clarify that it was on my arm, because some of the rumors had already morphed into a Pi symbol on my butt or a tramp stamp. I wanted to squelch that idea, but it did allow me to talk about the constant in the equation and how the “juiciness” of the rumor might effect the equation and growth rate.

That night I got a gel pen and made a tattoo to keep the fun going. I printed out a Pi symbol and flipped the paper over and filled it in with gel pen ink. I slid some deodorant on the back of my shoulder and then put the paper on my back with a wet rag like a fake transfer on tattoo. My son had to fill it in. Here is the pic I got.

The next day In class there were a couple of students who messed something up and so I told them I would show them a picture instead.

My Euler’s method lesson has never been so exciting. I have a whole year to think up a new rumor to spread for next year’s lesson.

This entry was posted on March 13, 2015 by kaleb40 in Uncategorized and tagged anticipatory set, awesome, Calculus, euler, lesson, Math, slopefield.