First you get an idea to spice up a lesson.

Second you hem and haw about whether the amount of increase in student learning/interest will be worth the time and effort involved.

Yesterday, I taught volumes of revolution… and the day before I was deciding if I wanted to bring in a drill to show visually how something rotates around an axis.

I got up in the morning and decided to just go for it. I went to my shop and grabbed my drill and a bunch of cardboard.

Find the volume of the solid formed when the region between y=x, the x-axis and x=4 is revolved about the x-axis.

In class I cut out the shape we were going to revolve and had students predict what it would look like once it was rotated. Right then my evaluating Admin walked in for a surprise visit. Good timing! Then, I taped the cardboard region to my drill bit and turned on the drill.

I experimented with holding it in front of the projector to get a shadow. It kinda worked, but the angle was tough because I have a short arm ceiling projector. It’s almost easier to just look at it from up close. The angle matters. 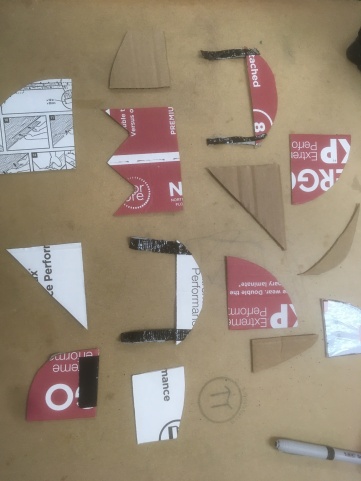 Part of the assignment I gave was for each student to choose a problem and cut out their own cardboard region. Then the next day in class each student had to come up and attach their shape and use the drill to make it spin. I was surprised that many students had never used a drill and were a little apprehensive. Here’s to new life experiences in math class. Hey!